Who hasn’t imagined sometimes with living in a dream place with wonderful views to the Mediterranean Sea? How many people would love to build their dreamed home in a natural environment five minutes from the beach? Moreover, how many people would desire to go for a walk through the corridors of their new home even before it was built? "Villa Larus" fulfills all these wishes as if it were a magical genius from stories like "The Arabian Nights". More than that: it's already a VReality. 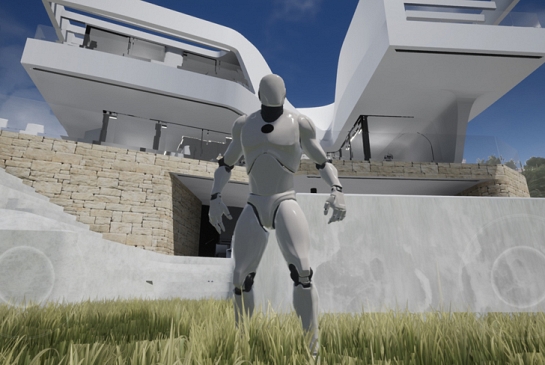 GGarchitects’s virtual reality application is already totally available in the App Store in order to show to the world what it would be like to live in this coastal villa recently built in the town of Javea, Alicante. It’s a program designed for tablets, both iOS and Android, and which has been developed with an open source graphic engine such as Unreal Engine 4.

What functionality does "Villa Larus" offer? In order to show to the users each of the corners of this fantastic construction, GGarchitects’s development team has enabled four different types of virtual tours. The first one, the "Video Tour", consists of an automatic tour through cameras which offer a general overview of each of the places of this villa. While this first mode offered a totally passive experience, the second one is just the opposite: in the "Walk Around” mode, the user possesses an avatar which allows him to decide which part of the house visit and enjoy his new home with a camera in third person.

The magic of virtual reality is materialized in the third and the fourth tour. Both are very similar and they offer a totally immersive experience using a camera in first person which allows to move through the scene by selecting control points whose location has been carefully chosen previously to offer the best and most spectacular views. However, there is a small different between these tours: in the third one, the "Video Tour", the user rotates his point of view with his finger, simply moving it on the screen, while in the fourth one, the "Inmersive Tour", he has to physically rotate his tablet to feel that it is a portal to a virtualized place that seems rather real.

When you have to start an architectural application, first of all, the development must consider what technology it’s going to use, what software it’s going to license and which platforms are the application target. There are several graphic engines available in the market and each one has several skills and offers different services. In GGarchitects decided that Unreal Engine was the chosen one to develop this type of applications, an open source graphic engine that allows to work with materials, geometries, cinematics… All without subtracting a bit of functionality for the application.

To summarize, "VillaLarus" is a sample of how it’s possible, from real project blueprints, to develop applications that transport the user to virtual environments that simulate architectural and natural environments based on the reality that GGarchitects builds. In fact, a VReality that not only serves to virtualize real-world environments, but can also be used to create fictitious spaces that only exist in the digital world.

Anyone can test “Villa Larus” in his iPad device by downloading the application in the following link: https://itunes.apple.com/us/app/villa-larus/id1316682976?mt=8&ign-mpt=uo=4
Coming soon to the Google Play Store for Android tablets.