Scheme and Conditioning Factors A complex of 3 buildings and landscaping destined for R&D+i in the Automotive Sector. Two of the buildings are intended for use as Development Units (halls) with laboratories and small-scale production. The third, the Main Building, houses research units of various companies in the automotive sector, a laboratory (for common projects among the resident companies) and the social block of the complex, comprising: main lobby, auditorium, training classrooms, classrooms for projects in cooperation with universities, and the offices of the centre’s management. The site was flat when the project was drawn up. The landscaping plan for the industrial estate has strongly altered the original topography. Due to the reduced height limit permitted on the estate, and the elevated ground level of a large part of the site boundaries, the roof of our buildings has a great visual impact. In addition, the presence of a large Combined Cycle Power Station beside the East façade has to be added. This research centre has nothing to do with a Technology Centre as far as usage is concerned. A Technology Centre is run by an institution and provides services. The AIC was born from the idea of it being the same companies as set up the complex that have their own research spaces in it, but that there are other spaces for projects carried out jointly with them, and the management is a mix of both public and private. Compositional Solution The Development Units are set in isolation for functional reasons and for future versatility. A triangular landscaped area articulates the space between the Development Units, the Main Building and the spaces reserved for future expansion. The complexity of the main building’s facilities is unified under a large silver aerodynamically-shaped roof inspired by the bodywork of prototypes and racing cars. The main building is composed of two fundamental parts: the social area, set around the main lobby; and the area for R&D projects. WEST EAST In the transverse section of the R&D area, the functional layout is understood in the solution that has been given to the problem of the confidentiality of the activities in the centre (those specific to each company and those shared with others). Continuing from West to East, we have the garden, a landscaped fold in the terrain generating a patio alongside the façade which we call a “burladero” [literally “the barrier behind which the bullfighter takes refuge in the bullring”]. It is serves as a screen so that small machines can be installed for the laboratories of each company without any visual impact. Company laboratory downstairs, offices upstairs. Continuing at the ground floor level, an internal access “street” with the laboratories off it, for the companies one side and on the other side those in common. Above it, at the first floor level, a passageway fulfils the same service for people to access the offices of the companies. And finally the area of the shared laboratory, the highest enclosed space in the building. The lower parts of the roof are reserved for future “units” of the shared projects. At the end, the East façade is designed like a fold of the roof down to the ground, negating the presence of the combined cycle power station. The “street” is covered in order to reinforce the image of unity the centre wishes to convey; not to mention the advantages in standing up to the Vizcaya climate, as well as facilitating the control of some habitually untidy spaces (the accesses to any premises, full of boxes and rubbish that “aren’t anybody’s”). The social area is planned at the head of the building. A large lobby facing South forms the end of the internal “street”, surprising those entering it. Some huge glass doors make this connection possible: a car can get in as far as the lobby (for presentations of new models, prototypes, etc). The training areas are integrated into an aluminium box: an auditorium downstairs, training classrooms upstairs. The management is located in the most aerodynamic element of the roof: a fold inspired by the air intakes of racing cars. It facilitates a generous access porch and gives the centre’s management to have a commanding view of all the facades. Urban Insertion The complex is located on an industrial estate away from the urban nucleus. The design strategies have been geared, on the one hand, to making the building visible from the bordering motorway (the aspect of the South facing lobby), and on the other, to avoiding the constant view of the Combined Cycle Power Station from the work spaces. This is achieved by orientating them towards the West, where a garden provides a rest for the eyes, something that is atypical on such an estate. The triangular garden articulates the space between the Development Units, the Main Building, and the spaces reserved for future expansion. Constructional Characteristics Special care has been paid so that the necessarily elevated number of outdoor machines and equipment that a centre of this type needs, have the least visual and acoustic impact. To that end various patios have been planned, both let into both the façade (“burladeros”) and the roof (see transverse section). The solar panels are installed over the roof patios, contributing to that idea of concealment. The structure is of steel at the head (social area) and prefabricated concrete in the rest. The facades are of kalzip and curtain walling. 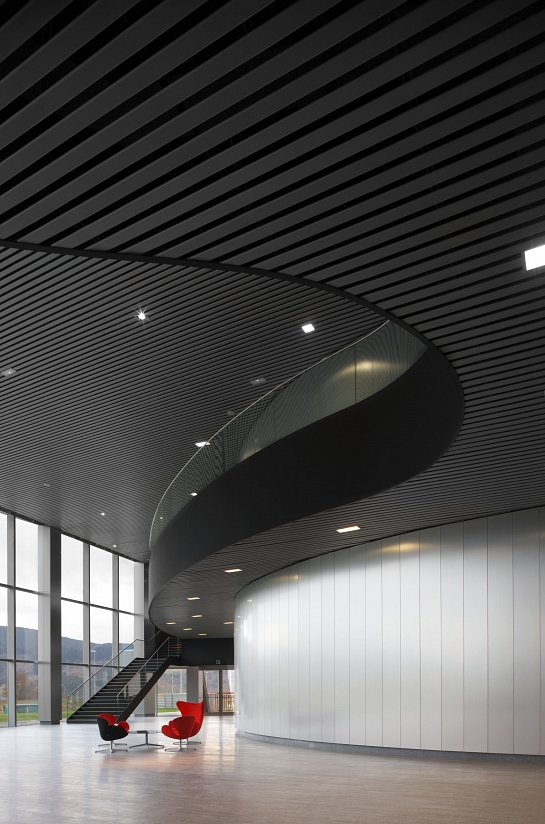